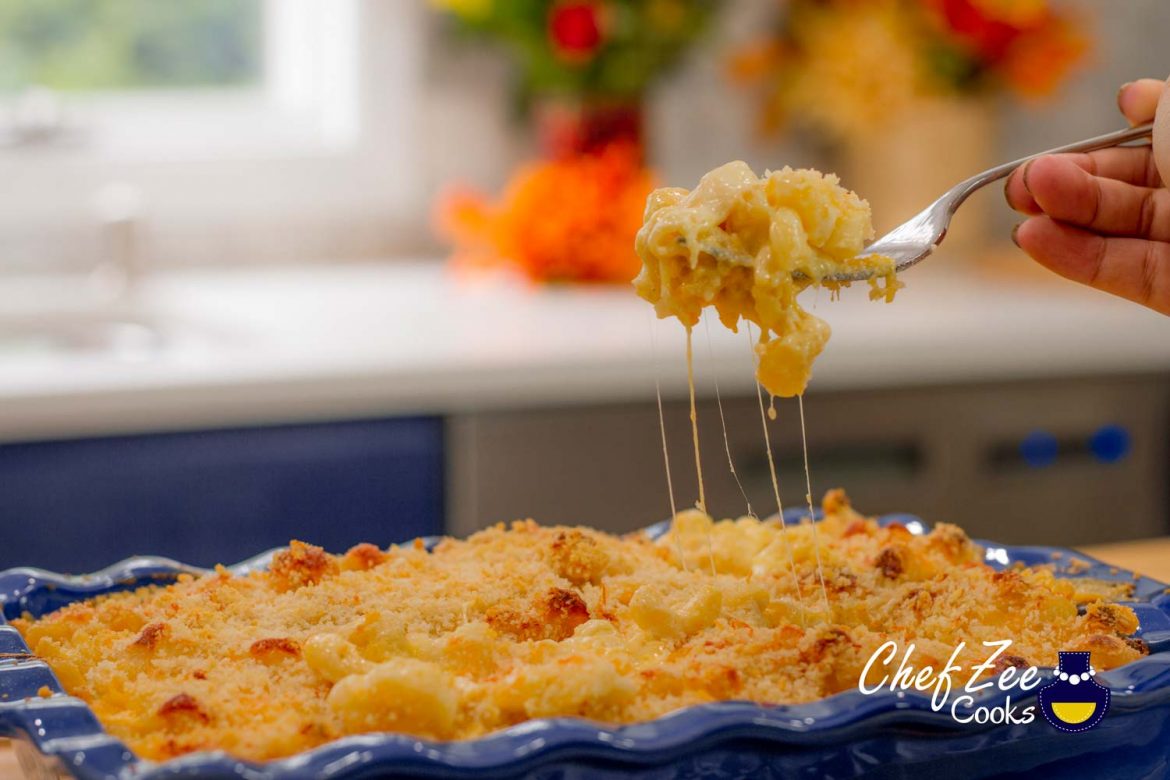 The holidays are not complete without a fantastic Mac & Cheese recipe. In fact, I think everyone should have a go to Mac & Cheese recipe that they can perfect because it’s an all-around people pleaser. It’s a dish that picky kids and grown ups love all of the same. It never disappoints and if anything, people lose all of their sense when there’s a good Mac & Cheese in attendance. Now with that being said, not all Mac & Cheeses are created equally!

I remember the first time that I had microwavable Macaroni & Cheese.  It was a BIG DEAL! To be honest, I didn’t grow up eating processed or frozen pre-made food because it was too expensive. In hindsight, it was amazing because it saved me from a childhood of ready-made frozen nuggets and pizza. My grandmother made everything from scratch and mixed everything by hand. Buying ready-made food was out of the question. My grandmother knew that if you just bought all of the ingredients, invested some time, then you could feed a whole family AND have leftovers. Nonetheless, as a First-Generation American, I had friends who didn’t have this same set up at home. I’d visit friends and see them preparing their own meals by simply placing them in the microwave. Thus began my curiosity!

I begged my mom and grandmother to buy ready-made Mac & Cheese and after many “No’s” and “esa vaina es mala,” (That sh!t is bad) I finally wore their patience thin enough to where they said yes! **Cue major excitement** So we go the store, we get the Mac & Cheese, I come home, follow the directions, pop it into the microwave, mix everything, taste it… and then the moment of truth. Oh my goodness, that thing was AWFUL! (No offense to anyone who loves that stuff). I learned my lesson. However, I now had a huge problem. What was I going to do with the pack of Mac & Cheese that my grandmother bought me? There was no way it was going in the garbage, and there was no way that I could get away with not eating it. Wasting food wasn’t an option and coming from a Hispanic Family, Mac & Cheese wasn’t a dish that was going to make the Sunday Dinner Line-up. It’s not something that we eat. So I did what any 10 year old would do… I experimented. 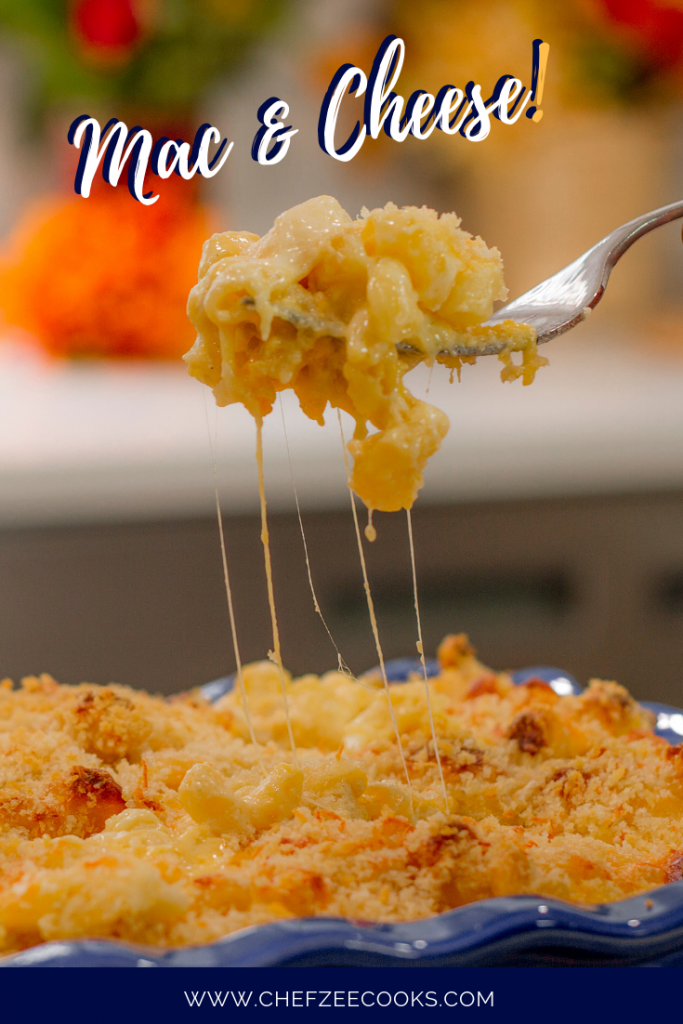 I began by asking the non-Hispanic adults in my life how they made Mac & Cheese. At the time, we didn’t have cable so watching The Food Network just wasn’t a thing. Over time, I began to swap out water for milk, powdered cheese for actual cheese and then I started adding butter and my own seasoning. In no time, I soon became the kid with the best microwavable Mac & Cheese. Ten years would pass before I tried my hand again at making Macaroni & Cheese.

This time around, I was older in my late teen-early twenties. I had lived in France and was now going to college in Upstate New York. I had also discovered the delight that is aged Vermont Cheddar Cheese  and Local American Cheese. My roommate and I decided to spend Thanksgiving together in our college apartment. It was my first Thanksgiving away from home. [read: my first Non-Hispanic Thanksgiving] Together, we made a list of the dishes that reminded us of home that we’d make to celebrate the holiday. She wrote down, “Mac & Cheese” and right away I bragged about my awesome Mac & Cheese. Lies. It had been YEARS! Nonetheless, we went to the store, grabbed the ingredients, and I attempted my first grown up Mac & Cheese.

That first Mac & Cheese was GOOD.  I credit my years living in Syracuse and France for inspiring how I made my first Mac & Cheese and ultimately, how I make it to this day. Despite the fact that this dish is always evolving with me, it will forever be France & Syracuse at its core. I love New York State Cheese. It’s creamy, perfectly salty, and screams Fall! The bechamel sauce that brings everything together ties in the life that I once had overseas. Together they form a creamy dish that has an undisputed place at the dinner table– even with my Hispanic Family!

In fact, after making my first grown-up Mac & Cheese, I made it again and again that year until finally a year passed and I was celebrating Thanksgiving with my family. By this time, my grandmother had trusted me just enough to be her sous-chef but not enough to let me cook my own thing on my own. I told her I would be adding an American dish to this year’s dinner. I explained that it was a cheesy pasta dish that you bake in the oven.  She scoffed because to her the only Holiday dish worth being excited about were the classics– Pernil, Pavo, Pastelitos, Ensalada de Papas and more. Once dinnertime came, all of the kids jumped at the Mac & Cheese and raved to my aunts and uncles. It was an instant hit.

My Mac & Cheese is legendary in my family! It’s the dish that brings together both the Immigrant Generation and the First Generation American crew. All of my cousins loved my Mac &  Cheese and within a year, my aunts and uncles finally tried it and they too loved it. In fact, I can’t show up to a family party or holiday without my Pernil, Ropa Vieja, or Mac & Cheese! Give this recipe a try and perhaps it will become a family favorite of yours as well!

Don’t forget to watch my video on How to Make The Ultimate Baked Mac & Cheese on my YouTube Channel: Chef Zee Cooks

Don’t forget to Pin this yumminess to your Pinterest boards!

Feel free to have fun with the cheeses that you use. Always use a blend of different cheeses for maximum flavor and depth. Mozarella and Muenster Cheese add drama since these are stringy cheeses