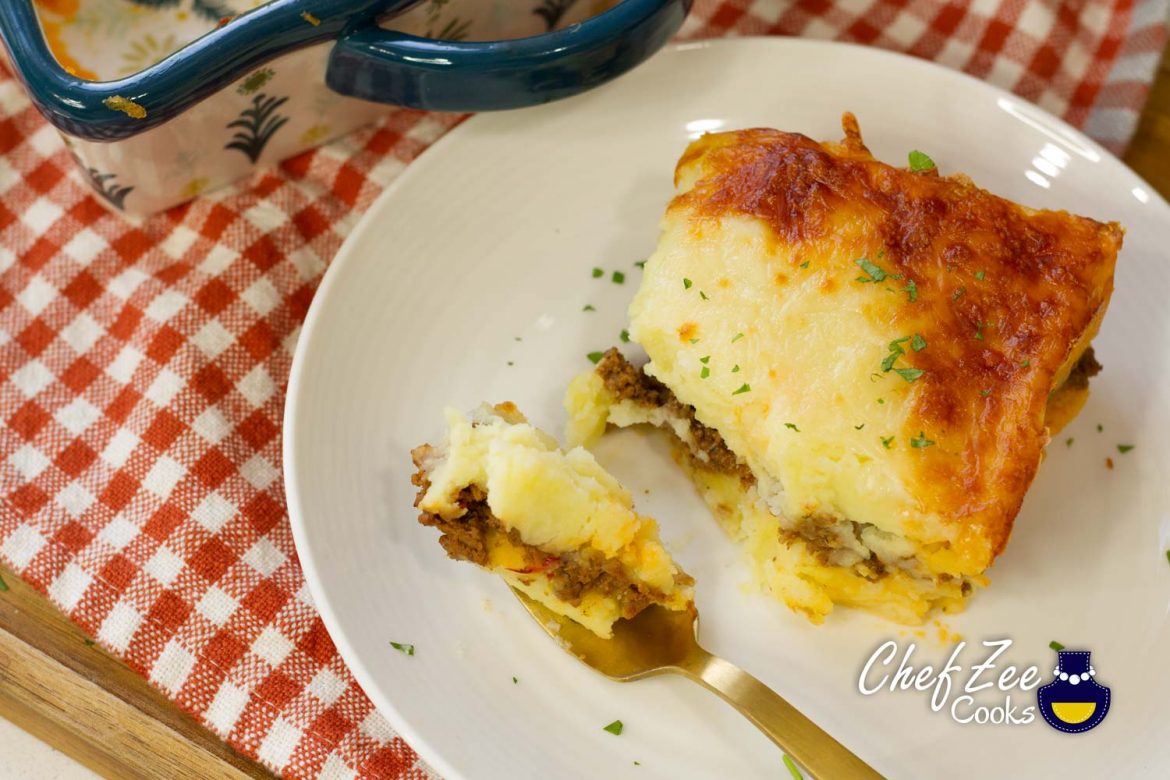 Imagine craving a lasagna but in the form of meat & potatoes… Imagine having a good ol’ Shepherd’s Pie but wishing it had the Latin-Caribbean flavors that you grew up with. Now imagine just wanting a decadent meat and potatoes dish with awesome sauce and plenty of cheese. Drooling yet? Today, I introduce you to Pastelon de Papas which is essentially a Dominican Version of Shepherd’s Pie.  It’s the very essence of comfort food since it combines all of the fan favorites– meat and potatoes.

I have to say that of all of the pastelon dishes I grew up eating, I ate this one the most. It was hands down a winner with me and all of my cousins. It was the perfect way that my grandmother bridged the gap between Hispanic culture and American culture. As a first generation American, you straddle two worlds. Your American world that you share with your peers and then your Hispanic that you share at home with your family. It’s inevitable that the two will clash as you come home asking your grandmother for peanut butter & fluff sandwiches, mac and cheese, and nuggets. My favorite is watching her squint her eyes as I explain all of these American dishes that my friends love at school only for my grandmother to say, “Y que eso?” … (“What is that?”)

As a child, I never realized just how difficult it must’ve been for my grandmother to assimilate into an entirely different culture after having lived a whole life. Unlike my mom who came to this country at 18, my grandmother was full grown adult who had raised several kids, siblings, nephews, and even grandkids. I remember getting mad when she refused to cook some the dishes that I had only heard about– like macaroni and cheese. Overtime, I grew to appreciate more than life itself. It’s because of her that I honor tradition and it’s also why I’m still so tied to my roots.

As a first generation American, it’s easy to shed your roots and fully adopt your new home– because it is home. I was born and raised in Queens, NY and a New York Slice is very much part of my DNA as is Mangu & Ropa Vieja. I never realized that my grandmother made Pastelon de Papas as way to relate to younger generation.

Outside of soup, Dominicans don’t really eat potatoes. We have so many other starches in our diet, that potatoes are low on totem pole of starches that we choose to eat. When we do eat it, we’re either whipping up a mean mashed potato or having our own version of shepherd’s pie.

Now as you can imagine, Pastelon de Papas does differ from regular Shepherd’s Pie in a variety of different ways. To start, we’re going to be making Carne Molida aka Picadillo. We’re going to season it with classic Hispanic flavors like Dominican Orégano, Adobo, Garlic, Cilantro, and Lime. Few things to note when making Carne Molida/Picadillo

Now that we’ve covered the Carne Molida Basis for this dish, the other major component we must tackle is the mashed potato. Warning: You will have to resist the urge of eating all of the mashed potatoes when making this dish! It’s so easy to get carried away that in end you may not have enough mashed potatoes to actually assemble the dish…. I’ve been there. You can use whichever mashed potato recipe you like! I suggest keeping it simple since the ground beef will already be loaded with flavor. I also suggest using golden potatoes since they’re super buttery and naturally creamy. However, Idaho potatoes will also.

Last but not least, don’t be cheap with the cheese! You can use cheddar or mozzarella cheese or you could even go half and half. The choice is up to you. Me personally, I’m a mozzarella cheese kind of girl. I blame my Italian Step-Dad.

If you like to see a step-by-step tutorial on how to Make Pastelon de Papas | Dominican Style Shepherd’s Pie, feel free to visit my YouTube Channel: Chef Zee Cooks

And now for the recipe….