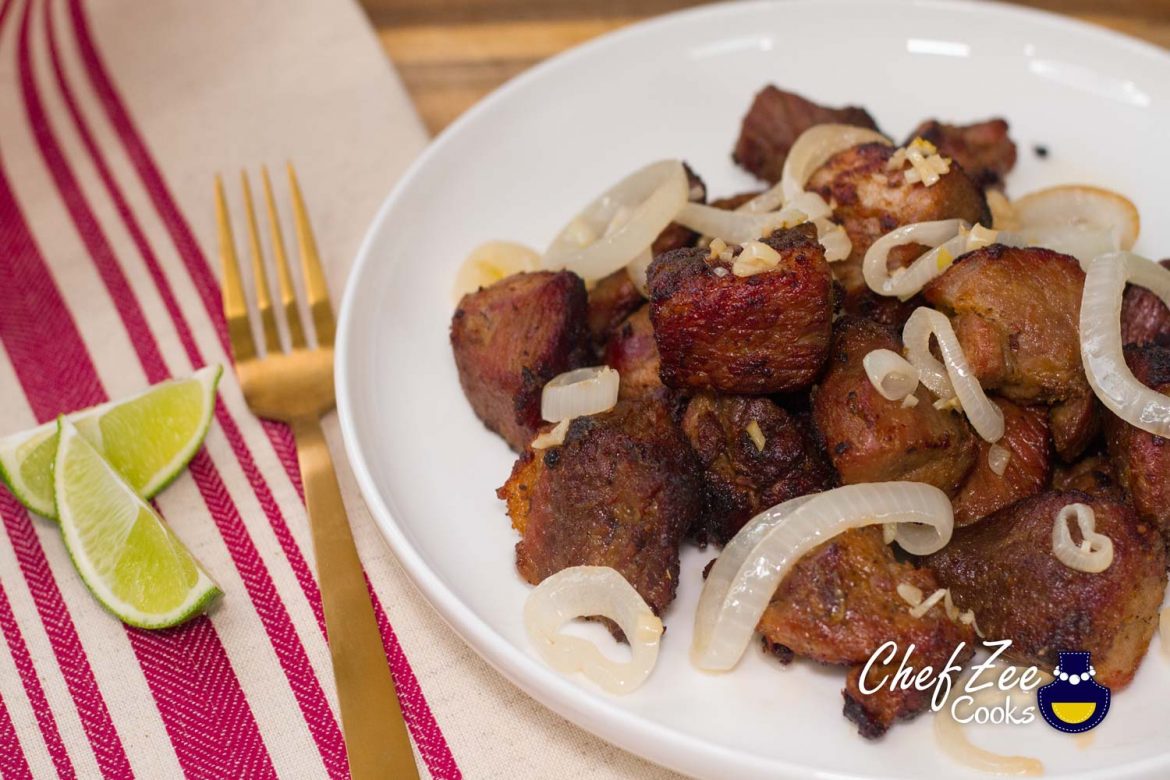 Masitas de Puerco are gentle fried pork chunks that are utterly delicious and one of my all-time favorite Cuban dishes. Not to be confused with its half sister– Chicharrones de Cerdo which are deeply fried and just as good! Now as you can imagine, there are a million and one ways of making this dish. In fact, my version deviates from the traditional version quite a bit for the simple fact that I don’t cook Masitas de Puerco in lard.

Traditionally, you season the pork with salt and sour oranges and let it marinate. You then cook the pork in its own fat and add lard to help the pork begin frying. Afterwards, you drizzle freshly made Mojo and enjoy with boiled yuca, rice and beans, or platanos — plantains. Honestly, this method works beautifully but if I’m being completely honest, I’m personally put off by cooking in lard. Don’t hate me. In 2019, we have new update cooking methods which will still give us tasty and juicy results.

To start, I like making Masitas using pernil. Yes, you heard that correctly. I like using pork shoulder to make Masitas because the meat is flavorful and affordable so I can feed a village whenever I am making this dish. However, using pork shoulder will also mean that the Masitas will take a long time to cook. As an alternative, here are other cuts of pork that you can use:

Keep in mind that unless you but the meat already boneless, you will have to cut the meat up yourself. Depending on the cut of meat that you get, will also determine how long it takes to prep the meat. Nonetheless, you do want to cut the meat into medium sized pieces and you want the pieces to be as uniform as possible so that they all cook evenly.  No worries if you have a few pieces here and there that are small. Those are perfect for tasting later on!

And now for the marinade! You can honestly keep it fairly simple and season the meat using sour oranges and salt. If you don’t have sour oranges, then you can create your own by using equal parts oranges and lime or you can simply just use limes. Just beware that limes are much more tart and sour than regular sour oranges. However, that’s not to say that just using limes will negatively affect this dish. It just means that you won’t have to marinate the meat as long. If you season boneless meat in acids for too long, then you risk the meat getting too tough and cook time being longer.

I personally love infusing as much flavor as I can into this dish so I season the meat very similarly to the way that I season pernil. I mash fresh garlic in my pilon (mortar & pestle), add salt, Dominican Orégano or regular orégano if that’s what you have, and sour oranges or limes. I then let it marinate for about 20 minutes while I prepare my mojo.

Once I’m ready to start cooking the masitas, I add a good amount of canola oil to the pot and then add the meat. Luckily, this is one of those recipes where you don’t have to worry about overcrowding the pot. In fact, you want the meat to sweat so that it can begin to soften. You also want to make sure not to let the oil get too hot because we don’t want the garlic to burn and thus become bitter. After the meat as softened, it will begin to fry in the oil. You can fry the meat as much or as little as you like. I personally like to fry it until it has a medium brown color. Then I remove and drain the excess oil.

And now for my favorite part– the mojo! Trust me, you don’t want to skip this step since I personally think that it takes this dish to the next level. First you slice onions and garlic and then add sour oranges or lemons. A tiny bit of salt and then you gently saute in oil. Once the onions and garlic have become slightly translucent, it’s time to drizzle over top of the Masitas de Puerco. And just like that… magic is made!

If you’d like to see a step-by-step tutorial on How to Make Masitas de Puerco visit my YouTube Channel: Chef Zee Cooks!

And now for the recipe!