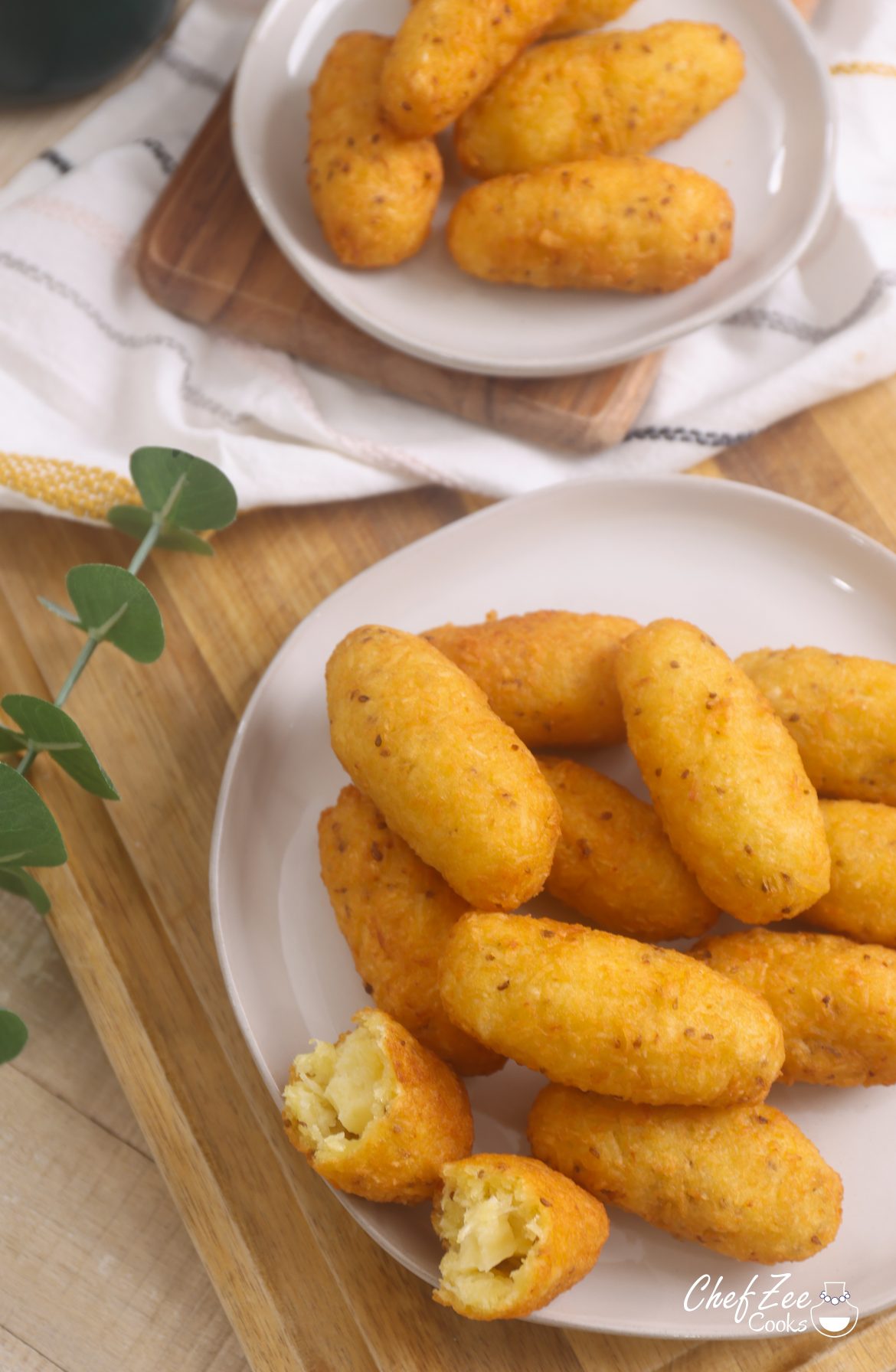 Chulitos de Yuca con Queso are Dominican Style Arepitas that I like to fill with cheese and then fry until they’re golden brown. They’re a great appetizer and a finger-food that my family loves!

If you know me, then you know that yuca is hands down one of my favorite root vegetables. (Sorry plantains, move over!) So it’s no secret that I also go crazy for Chulitos de Yuca with Cheese! They’re a great way to get any dinner party and family gathering started!

Arepitas de Yuca are a close relative to Chulitos de Yuca. In fact, all of the ingredients are the same. The main difference is the shape. Now, like many of my classic Dominican recipes, there are a ton of ways of making them. I remember watching my grandmother make them almost every Sunday. It always felt like she never made enough because they were gone before you could even have seconds!

She’d always have them on the stove in a plate with paper towel soaking up any excess oil. My uncle would bee-line straight for these golden fried delights. You could eat them on their own with ketchup or hot sauce. The yuca + anise seeds + cheese was all you needed to activate your taste buds. These days, I do a little happy dance, because that’s what foods from childhood does… bring me joy!

My version of making Chulitos de Yuca con Queso (Fried Yuca with Cheese) is very similar to my grandmother’s recipe. In fact, this is one of the main dishes that I make whenever my mom is sad and missing her mom. The warm yuca with anise seeds immediately takes you back to all of the holidays, dinners, and gatherings we had when my grandmother was still alive. That’s the power of food and family recipes. Nothing can ever bring back those we lost, but recreating their special dishes is sometimes the best that we can do.

When making chulitos de yuca, I kick things off by peeling the yuca. It’s super important that you get ALL of the skin off. Then I slice the yuca in half to reveal the thick membrane that runs down the center. This root/vein can be harsh so I make sure to remove it. Afterwards, I finely grate the yuca, and then move on to seasoning it.

Tip #1: Always peel the brown skin completely from the yuca

Tip #2: Remove the root/vein that runs down the center of the yuca as well

Tip #3: After grating the yuca, if there’s too much “milk” aka liquid from the grated yuca, feel free to drain that as well

Tip #6: Heat up the oil over medium-high heat. You want to fry the chulitos until they’re beautifully golden brown and long enough so that the cheese inside melts.

In general, I begin preparing these appetizers 1-2 days before I actually have to make them. I’ll grate and season the yuca no more than 2 days in advance. I’ll then store them in the fridge. On the day that I’m ready to fry the Chulitos de Yuca, I’ll form them in my hand.

When stuffing the chulitos with cheese, know that you can use a variety of different cheeses. For this recipe, I’m using frying cheese since it melts beautifully but also holds its shape. You can use mozzarella cheese as well if that’s easier to find.

Lastly, frying the Chulitos de Yuca is that last final step. The key is to get the oil nice and hot, but not too hot where it will burn the outside before cooking the yuca all the way through and thus melting the cheese inside. I recommend using a cast iron dutch iron since this pot will retain heat really well. Remember to try just a few at a time- no more than 4-5 depending on the size of your pot. The oil will cool too much if you add too many.

Are you hungry, yet? If you’d like to see a step-by-step video on How to Make Dominican Chulitos de Yuca, visit my YouTube Channel – Chef Zee Cooks.

… And now for the recipe!

You can make seasoned grated yuca mixture at least 2 days advance before frying. You can also make the chulitos de yuca without any cheese and it will be delicious. Form a mini chulitos/arepita first and fry until golden brown. Taste test and adjust seasoning to batter if needed before forming the rest of the chulitos/arepitas